The finest PCR fidelity in over 10 years

In this blog post we look at Q5® High-Fidelity DNA Polymerase by describing:

What is fidelity or “Proofreading activity” of a Polymerase?

The precision of template strand reading
Precision reading of the template strand means that the polymerase enzyme interprets the exact nucleoside triphosphates order exposed on the DNA strand to be replicated. This ability of the fidelity polymerases is obtained by a significant binding preference for the correct versus the incorrect nucleotide triphosphate during the DNA polymerization.

When is fidelity important?

Fidelity is important for applications in which the DNA sequence must be correct after the amplification, including:

On the other hand, fidelity is less important for many diagnostic applications where the read-out is simply the presence or absence of a product.

Why is Q5 so proofreading and robust?

In 2012, the Q5 DNA polymerase was released by NEB as a new standard for both fidelity and robust performance. The fidelity of Q5, measured as >280 times* higher than Taq polymerase, ensures ultra-low error rates. In addition, Q5 demonstrates:

The superior proofreading activity of Q5 DNA polymerase is caused by a fusion of to the processivity-enhancing Sso7d DNA binding domain polymerase from Sulfolobus solfataricus; a species of thermophilic archaeon isolated and discovered in the Solfatara volcano. This fusion improves fidelity (more than 50-fold higher than Taq), but also speed and performance reliability (amplifying targets up to 20 kb long with extension times as low as 10 seconds per kb). In addition, the Q5 buffer system has been extensively optimized to provide robust performance across both high-GC and high-AT regions, as well as other challenging amplicons. 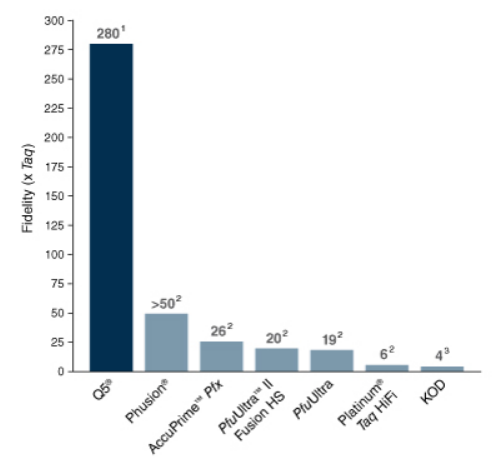 1 PCR-based mutation screening in lacZ (NEB), lacI (Agilent) or rpsL (Life)
2 Due to the very low frequency of misincorporation events being measured, the error rate of high-fidelity enzymes like Q5 is difficult to measure in a statistically significant manner. Although measurements from assays done side-by-side with Taq yield a Q5 fidelity values of approximately 200X Taq, we report “>100X Taq” as a conservative value.
3 Takagi et al (1997) Appl. Env. Microbiol. 63, 4504-4510.

Explore or challenge the outstanding Q5 fidelity features of the Q5 products, by requesting a Free-of-Charge sample or buy now and save 20% on all Q5 products from NEB.